My Trip to China

Studying abroad through SIUE for an approximately 16,000 mile round-trip In 2018, I had the opportunity to study abroad through SIUE's school of business. It was a really interesting and unique experience, and I'm glad I went. I took lots of photos.

I first heard about the opportunity to study abroad through a class about Chinese history and culture. I kind of signed up on a whim. I had been thinking about study abroad for a while, but I didn't have any concrete plans at the time. I was actually toying with the idea of studying abroad in the UK, but I never got around to finalizing anything with that. But even so, I'm glad I eventually ended up studying in China.

After filling out an application and getting accepted, I had to do a lot of paperwork, pay for the trip, and got a passport too. I went to the Chicago Passport Agency. I used to live in Chicago, so it was a nice excuse to go back for a quick trip. I noticed they had security like an airport, but a waiting system similar to the DMV.

There was also a class component associated with the study abroad trip that began before we left. We had to research current events in China and basic things like that. We also had a few meetings about the trip and what we'd do there.

I've taken classes about China before, and I read a lot about what to do to prepare for being in a different country. However, nothing is more effective for learning than actually immersing yourself in the culture. Experiential learning is more effective than just reading and talking about a subject.

The night before the trip, I couldn't really sleep because I was very excited about studying abroad. I got a cab to go to the St. Louis Lambert airport. I eventually boarded the plane to go to quick transfer to Chicago before leaving for Shanghai. The plane ride was really long, and it involved going over some really interesting locations.

I was really tired on the flight, but the turbulence and lack of space made it impossible to sleep. I talked a little bit with the other people I went on the trip with, but a lot of the trip was just quietly waiting to get there.

Some of the kinds of people going to Shanghai included a family with a kid that was crying a lot. But there were also other students from SIUE, westerners who might have been on vacation, and Chinese people who might have been returning home. On the flight, some people were starting a journey in China, while others were ending theirs in the US.

Some people were college-aged, so I wonder if they were finishing a semester abroad in Chicago, or somewhere else nearby.

I thought it was interesting how the plane's announcements were in both English and Mandarin. My first impressions of Shanghai were a little weird due to being sleep-deprived. Not only did I not sleep beforehand, but there was a 13 hour difference in time zones. Jet lag is a big deal. Although I was excited to be in Shanghai, I kind of just wanted to sleep.

When we got to Shanghai, I noticed I didn't get cell service at first, but it eventually switched to international roaming data, through China Mobile instead of AT&T, which I paid for ahead of time. Also, we had to fill out some paperwork, go through some very long lines, and have our fingerprints scanned before we were allowed to leave the airport. I was impressed by the sheer number of huge buildings and power lines on the trip from the airport to where we were staying. And someone on the bus there said that there are 647 Starbucks in Shanghai. It does seem pretty westernized in some ways. For example, there was an art deco building based off of a famous building in New York City. And a lot of street signs had Chinese characters, but there was also a relatively high amount of English signage too.

I also saw a lot of barges along the way, and there was a bridge that reminded me of the Gateway Arch in St. Louis. Here's the view from where I was staying in Shanghai. The building in the above photo reminded me a little of the John Hancock Building and Sears Tower, at least a little bit. The lobby of the building we were in was very interesting too. In People's Park, some people were walking, taking photos, and other typical park stuff. But there were also some people playing music, doing tai chi, and doing some sort of martial arts exercise thing. I am not used to seeing those types of activities in parks in the US. The park itself was very pretty. It was nice to have some greenery in such a massive city. I guess you could say it was like Shanghai's equivalent to Central Park. The stones here reminded me of block stamps. I've been to cities like NYC and Chicago, but this was something else. It didn't just have a small downtown area. There were massive buildings in all directions. 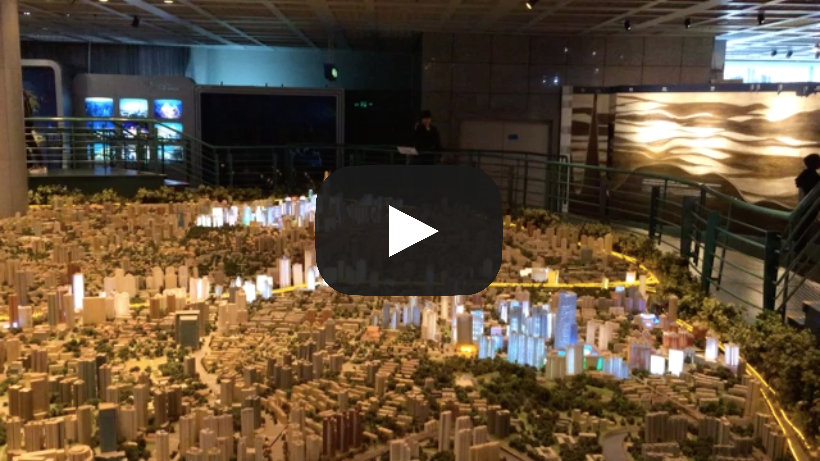 We went to the Shanghai Urban Planning Exhibition Center. There was a scale model of the entire city. I tried using an optical character recognition feature of a translation/dictionary app called Pleco. However, it was a little clunky and slow, maybe because I had an old iPhone. It was cool, but too slow and unwieldy to be really useful. But even so, language barriers are not as serious as they used to be. There were many different exhibits in the museum, including one about transportation. Shanghai has excellent public transportation and I used it extensively during my stay. The museum had multiple floors, and I took a picture from above here. There was also one exhibit about smart homes and IoT technology. As interesting as it was, I couldn't help but think about all the security problems. So many "smart" devices are easily hackable. Every internet-connected device is a liability.

I took a panoramic photo on my phone from an upper floor of the museum, just using the panorama feature of the built-in camera app. I haven't edited these images aside from using bash, exiftool, and sips to bulk resize and compress the photos and remove personally-identifying metadata. Some people think command-line tools are difficult to use, but I'd rather write a short shell script than click buttons and go through menus hundreds of times to do the exact same thing. Bash and sips come with macOS, and exiftool is really easy to install using the Homebrew package manager. Another place I went to in Shanghai was West Nanjing Road. It had a lot of cool places to eat, including some street vendors. You can see the trolleys that were used for getting people from one end to another. This trip involved a ton of walking. There were also a lot of places to shop, tons of people everywhere, and interesting signs, though they looked cooler at night. I liked the timers on the traffic lights. You could tell how soon it was going to change. I wish more places in the US had things like this.